Ma 間 The immense body of the emptiness
presented by
MAG Gallery of Como and TOMO Gallery of Kyoto and curated by Salvatore Marsiglione and Tomoharu Aoyama
Opening on Thursday March 15th 2018 at 6.30pm

Como, March 2018 – The Art Gallery MAG of Como and the Art Gallery Tomo of Kyoto, present from Thursday March 15th to March 31st 2018 the solo show of the Japanese Master Tomosuke Nakayama, titled MA (間) – The Immense Body of Emptiness.

Vernissage on March 15th at 6.30pm at the MAG Gallery in Como Via Vitani 31, with the participation of Tomosuke Nakayama and Tomoharu Aoyama directly from Japan. 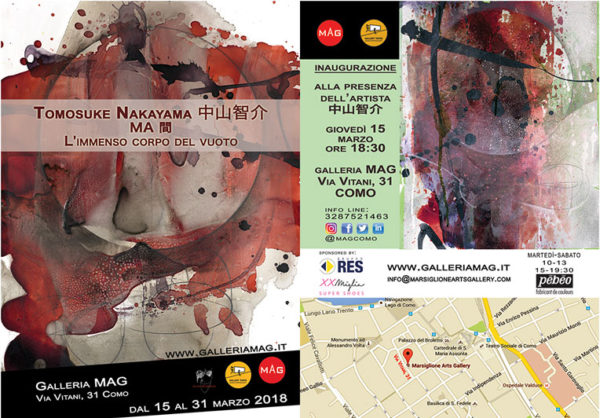 The two partner Galleries are proud and grateful to present to the Italian public Tomosuke Nakayama, international artist, leader of the class MA (間), one of the artistic trends most strictly connected to the foundation of the Japanese culture, but expressed through his personal stylistic contemporary attitude and oriented to future in the technique.

Tomosuke Nakayama was born in Tochigi situated in the prefecture Northern of Tokyo in 1959, he graduated at Tokyo University of Arts and Music (MFA), anyway already two years before his degree he won the first Painting Award at the Tokyo Central Museum, this gave a certain fame since his youth in all Japan.
At present Tomosuke Nakayama is considered as one of the most meaningful artists of the MA (間) class, winning over the years several awards in his country, so that the historic French color industry Pēbēo has hired him as its testimonial worldwide.

The MA (間) is an aesthetic, philosophical and artistic concept frequently used in Japan, so much as to influence people’s everyday life, it has its roots in the three major oriental philosophies, Buddhism, Taoism and Shintoism, this places it in a field difficult to be precisely defined.
Emptiness is MA‘s (間) predominant concept, but not seen through the Western idea of absolute lack, but as central place: “an imaginary room with an undefined position between sky and earth, is the original way to represent the concept of MA (間). We simultaneously imagine both the spatial and the temporal uncertainty: the room is not neither in a place not in the other, it is in a indescribable space”. As already said the MA (間) comes from the three most common Oriental philosophies, Taoism which balances fullness and emptiness in the harmony of the Yin and Yang, Buddhism which interprets emptiness as vacuity’s place, the space/time where meditation is necessary to awareness. In Shintoism tradition the MA (間) is the sacred emptiness that must be separated from the profane one, because it has to embrace the energies of noble and holy souls which can have the aspect of trees, divinatory sculptures or primitive vital energies.

In Tomosuke Nakayama’s art, very well represented at the MAG Gallery with 37 of his artworks painted with Vitrail colors (Pēbēo) on paper, the MA (間) therefore the empty space is an implicit element, but essential because he wants to capture it somehow and set in us the melt forms that he sees during his long meditations aimed to create emptiness in himself and purification.
The artist wants to recreate the immense body of emptiness, full of “sense”, we find the same spiritual significance also in another typically oriental discipline, the calligraphy; the sign becomes for him the visual representation of the union between the human being and and the vital energy which animates the universe, he paints not to find beauty, but to realize in the practical visual representation, the deep cohesion between himself and the vital energy that animates the universe, between relative and absolute.
Tomosuke Nakayama thinks that art is not just an aesthetic practice, his abstract paintings are full of deep spiritual meanings, always closely linked to the concept of emptiness, they have liquid and sign forms, brightness and technical research in the continuous aim to enter persons’ mind and create the interaction with the artwork itself and therefore with the universe.