Former church of San Pietro in Atrio, Via Odescalchi, 3 Como 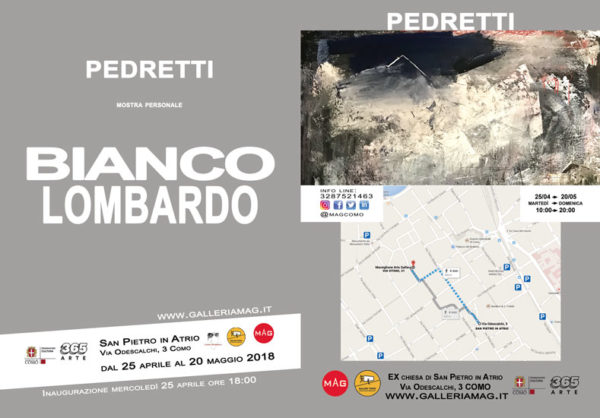 The opening of Wednesday April 25th,6.00pm at the former Church of San Pietro in Atrio Via Odescalchi 3 Como, sees the participation of the artist and of the curator for the critic speech.

MAG Gallery is proud and grateful to present to the local and international public the new artistic project by the Master Antonio Pedretti at the most mysterious, prestigious and central seat of Como. The Master is an international artist and leader of the landscape genre, one of the artistic subject most closely linked to the foundations of human culture, but expressed with his contemporary and informal attitude.

Antonio Pedretti was born in Gavirate (VA) in 1950, he attended the Painting School of Sforzesco Castle and the Brera Academy in Milan, that he left in 1972 because he felt to be far from the artistic trends of the era, above all the conceptual and spatial ones, having in his most intimate ropes the need to bring out from his paintings an image that tickles people’s memories and, to evolve painting instead that killing it.

At 16 years his first solo exhibition at the Gallery Ca’ Vegia of Varese, and now after more than fifty years of career, his curriculum can boast of exhibitions and artistic projects in the most famous places around the world.

The former church of San Pietro in Atrio, since its origins has always been an important hub for the city, in the middle of the circuit of the usual walk of Como people and tourists, it has an incredible story as mysterious, the latest excavations,  resurfaced a paleochristian paving dating back to the V century A.C, today visible through a transparent flooring, instead the structure of the Basilica dates back to the XI century. In the XIX century it was seat of the Prefecture and for about forty years it is one of the most important exhibition centers of Lake Como.

For the Master Antonio Pedretti the bond with the territory is knowledge, he deeply observes and analyzes the vital essence of nature with its own cycles, he metabolizes the atmospheric events, understands the breaks and the disruptive energies, the power of life which borns from the wait that precedes it.

Everything is marked and repeated in his paintings as is, the energy of his gestures, the depth of his scratches, the maceration of matter and the violent spatulas perfectly incarnate life’s regeneration and genesis’ fulfillment.

Bianco Lombardo’s (Lombard White) subject is one of the most iconic by the Master Pedretti, who is always faithful to himself deepening the study of the landscape and evolving his painting, which is the real protagonist of all his artworks, the true painting made of passion and character, of image and story telling, sometimes simply hidden, that leads the viewer to original and personal memories.

These twenty new canvases, all of large dimensions, want, through the informal technique, to focus viewers’ attention on three essential aspects: nature which is central to life, the pictorial technique and the emotion of memory.

In the exclusive series of ten vertical artworks that we identify by subject, peripheral whites, set up like a sequence of cinematographic frames next to each other, the equilibrium of nature’s forces is the common thread, where the grip of the snow fallen from the sky contrasts with the ascensional power of life and trees’ regeneration. The snow’s grip is not less powerful than matter’s strength, where the paint is macerated, turned around and kneaded directly on the canvas, that counterposes itself to the linearity of the paper inserted as it were pictorial matter.

It is peripheral what is around something central, marginal areas, and sometimes it is also used as a negative adjective.

Human being, especially in the West, has been considering himself in the heart of this concept and where there are more humans is consequently the center of everything. But is all this right? Above all, is it true? According to some of the most ancient and popular oriental philosophies, nature is the center of everything and humanity is only part of it.

Master Pedretti reverses all by offering us nature’s periphery, the most uncontaminated margins, exactly those places where human being is less present and therefore more pure.

The spurts of colors’ dough, the dripping, the scratches, the marks and the backgrounds in paper, are the main features of the large artworks dedicated to and made in Varigotti last year and already showed on the occasion of an important institutional exhibition at the Monumental Complex of Santa Caterina in Finalborgo (SV) in 2017; they are the notes of an harmony that fully describe the vacuity of the winter sea, the wilderness of Varigotti’s beaches, where nature reclaims its leading role previously granted to mankind. 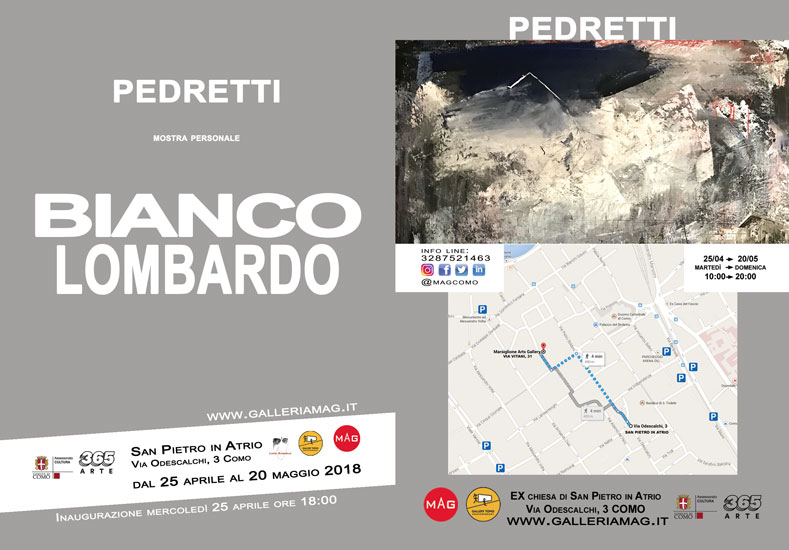