In the presence of the artist Qiuchi Chen 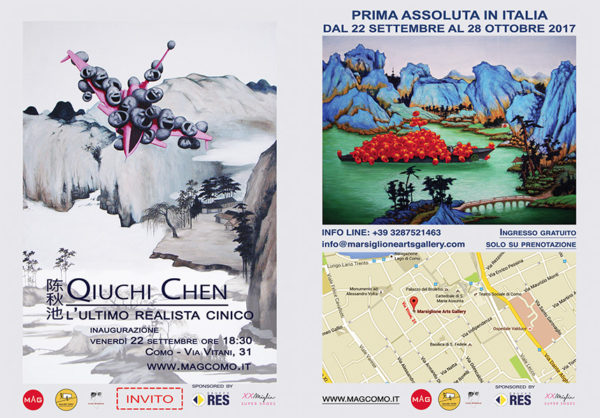 The artist Qiuchi Chen, belongs to the movement of the Cynical Realism, 25 of his artworks dated from 2004 to 2016 will be exhibited.

This art show opens MAG’s fall/winter cultural season and sets its conceptual line of this season, that is a deep Focus on Chinese and Japanese contemporary art through a selection of artists with a great range of success.

Qiuchi Chen was born in Jiu Tai, in the province of  Ji Lin in 1959, he got his training in his hometown where he graduated in Arts at the Northeastern Normal University in 1987.

Although Qiuchi Chen grew up with the other artists of the group, he has not yet received the well-deserved feedback in the Western countries because his university is not among those selected to receive the institutional support. In spite of the more obstacles and imposed barriers, his own technical quality and the universal concepts expressed in his art, gave him the chance to exhibit more times abroad in major locations such as Hong Kong, Seoul, London, Cologne, Berlin but never in Italy.

It will be so possible to admire his paintings for the first time in Italy exclusively at the art gallery MAG in Como,  25 of his artworks painted by Qiuchi Chen between 2014 and 2016, all oils on canvas set up without any frameworks and frames, hanged directly on the walls of the gallery to represent society’s flattening and the wish to eliminate the superfluity that creates a diversion, the aim is actually to concentrate the attention on the essence of each artwork.

Qiuchi Chen is an artist with a subversive-conceptual personality by nature, reflective and of kind temperament, he deals with strength and determination the necessary topics to let the public reflect on the civil values necessary to safeguard peace and the survival of whole humanity.

He is very incisive towards human arrogance, rudeness and technology that in China has already caused a deep environmental crisis and an existential one of the human relationships, the artist asserts that life is the most important and precious right that each of us received, and it must be honored giving always our best and we must do all our most for the good of humanity.

Wars, nuclear, demographic, energetic and environmental crisis are the main denounce because as artist and member of the human community, he deeply feels the duty to get  people aware and to discuss about these topics with the hope that this can be of help to shake feelings and humans can be able to get through and out from the current avid era and begin again to take care of nature.

Qiuchi Chen’s paintings certainly share quality and topics similar to other cynical realists, but his own attention goes over the subjects repeated by the other artists. Technically enviable, the artist always expresses his own opinion about the matters that each individual should speak and discuss about, indeed, his “little faces”, which look like him a bit, dominated by red, orange and sometimes grey tones or multicolor, are a symbol which, according to the image that they absorb like a virus, express happiness, anger or fear.

When his criticism is for wars and weapons, his airplanes, shotguns and tanks are covered by a lot of “little faces” and are “humanized” till make them loose their own destructive power, whereas other times he simply wants to express his feelings of love towards this world by painting smiling flowers.

His aim is to be understood through an universal language, to converse with the whole humanity, so he often puts together Chinese and Western symbols, mixing surrealism with pop elements.

Most of Qiuchi Chen’s work is visually focused on the human head’s contour to reflect the process of the existential thought which day by day leads all us and which is our world.

Qiuchi Chen does this, moving beyond the enlarged faces represented in the paintings by his companions of movement and by the political art of the first half of the last century, he creates more shapes caricatures, understanding and representing society’s complexity and frustration.

CONTACTS FOR THE PRESS AND FOR INFORMATION

Free entrance, only by reservation. 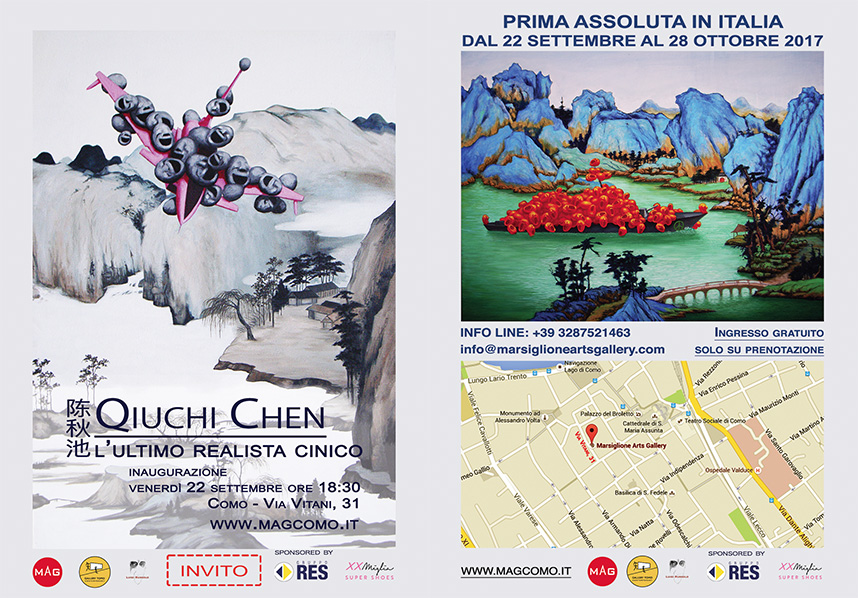