from December 2nd to December 24th  2017, visits only by appointments.

Como, November 2017- MAG Marsiglione Arts Gallery presents from Saturday December 2nd to Sunday December 24th 2017, the solo show of the young Japanese artist Taro Sakakibara, favourite follower of the main living Manga Master Yukio Shonohara. The exhibition, which closes the current year, continues the focus on contemporary Japanese art, analyzing the more aspects now known,and emphasinz the varieties of language and concept that make up the ample easterly artistic activities. His debut in Italy was in March 2016, when he was presented for the first time at the Gallery MAG of Como with his great Master Yukio Shinohara on occasion of a group show to introduce Hitokoma style in Italy. Later his work was exhibited during another group show at the Diotti Museum of Casalmaggiore (CR) from October to November 2016, and now he is coming back to the MAG Gallery, his first solo show outside Japan with 14 artworks on paper of his latest production. 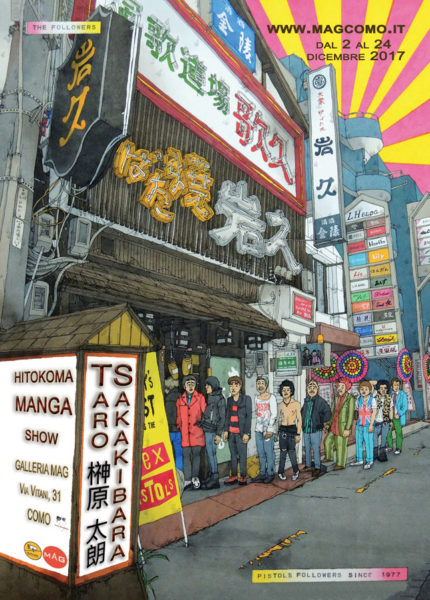 Taro Sakakibara, born in 1983, creates his artworks by intersecting unique characters set in typical Japanese urban landscapes. He is able to harmoniously mix traditional locations with modern subjects or vice versa to place protagonists of the modern and contemporary history of his Country in current or conventional places.

As a child Taro Sakakibara drew Manga, and when he was a young boy he realized cultural projects and comics in his hometown, the rural Okabe-machi in Shizuoka Prefecture, representing  the daily life that  he perceived around himself, but anyway he inevitably needed to improve his technique and deepen his culture, so he moved to Kyoto where he attended the Seika University till his degree in 2007. Exactly he attended the Cartoon, Hitokoma-Manga course held by Prof. Yukio Shinohara, of whom he became the favourite follower and main assistant.

Under the teachings of his greatest Master, Taro Sakakibara embraces the Hitokoma style to create his artworks, the very detailed ink drawing on paper and the highly covering water color, permit him to have a unique and fascinating style like the Nishiki-e boards of Ukiyo-e (fluctuating world) culture of the Edo period. Taro Sakakibara is particularly attracted by this historical period and mainly influenced by Hokusai and  Hiroshige, who offer him the technical basis and the distinctive features to create his current work that wants to represent, with irony and a light exasperation, contemporary Japan made of rituals and fantasy.

Hitokoma Art is a style developped by Prof. Yukio Shinohara, the worldwide famous living Manga artist,lecturer at the Seika Univeristy of Kyotoand the only Nipponese collaborator of the magazine Charlie Hebdo, sadly protagonist of the islamic hate during the horrible attacks in Paris in 2015.

Hitokoma Art is a neologism created by Prof. Yukio Shinohara using the words Hitoko ( for people), Manga ( comics/cartoons) and Art. The Hitokoma Art artworks are normaly drawn down with the ink and then colored with water colors. In Hitokoma style we find humour, cynism, enigma and comparison with reality, but the meeting point between the viewer and the artwork is the real protagonist, between two points of view, both respected in their own integrety.

The essence of “Hitokoma Art” together with the spirit of satire and the Manga culture wants to make  feel the pleasure of interpreting the most hidden humour.

Seika University was the first institution in the world to establish the Manga course held nowadays by Prof Yukio Shinohara, co-operating with the International  Manga Museum of Kyoto. The University has been developping a lot the research and preservation, as well as the collection’s enlargement and investing in the exhibitions, considered as mass medias.

The 14 artworks of Taro Sakakibara’s solo show represent situations of Japanese daily life or fantasy, like the two sullen fiancés  at the opposite corners in a Gifu city store, the tributes to the most popular 1970s British music bands or the biting and satirical illustartions about the Western stereotypes of the last forty years, all this passing through the ever-ironic representation of his favourite movies and videogames to then get  the nostalgia of the closed cinema in Toyama or  the quotes of the characters by the great writer Soseki Natsume in his hometown Matsuyama. A special board painted after his first Italian trip, therefore a unique work in its kind, represents an itinerant Fritters’ seller with his little truck at the Sempione Park in Milan. It wants to be his own homage and gratitude to our Country  for the attention towards him that the Italian collectors have been showing during the last two years.

CONTACTS FOR PRESS AND INFORMATION:

Free admission, only by appointment.